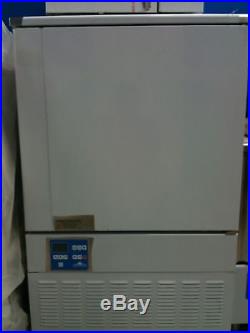 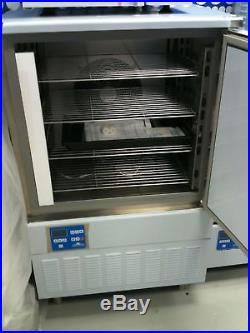 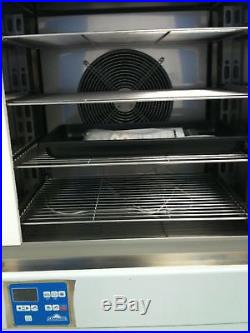 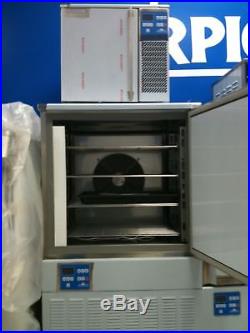 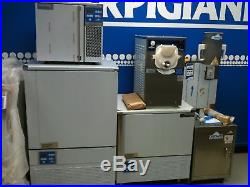 This blast freezer is designed for. Advanced methods of chilling Gelatos, Ice Cream Cakes, Pastries, Fresh Fruits, Vegetables, Meat etc... With this very helpful unit, you'll be able to prepare your product in a very short time. It is similar to a microwave, but instead of heating you are cooling. This unit will go down to -40 degrees Fahrenheit in no time.

His unit is a single phase 220v 60 Hz. This unit comes Carpigiani full warantty. Blast chillers are refrigeration units with circulating, forced air that are capable of safely reducing the temperature of hot foods from more than 145 degrees to less than 40 degrees Fahrenheit within two hours, in accordance with HACCP guidelines. Functioning in a manner similar to blast chillers, shock freezers have the ability to lower food temperatures further.

In any case, both help prevent foods from entering that danger zone of 140 degrees to 40 degrees where harmful bacteria can grow and cause foodborn illness outbreaks. While blast chilling technology has generally remained unchanged over the years, modern units are faster than their predecessors. Many units can take food at a cooking temperature of up to 194 degrees and lower it to 37 degrees in no more than 90 minutes. Not only does this bring the food through the danger zone quickly, but it also stops the cooking process even more rapidly.

The difference between blast chilling and shock freezing is also a time and temperature issue. Shock freezing is the process of lowering the foods core temperature to 0 degrees from 194 degrees in 4 hours or less. That said, there are many other benefits behind blast-chilling other than just food safety uses.

Here are a few of them: Better food quality. When not shock-frozen or blast chilled, the water content of food form macrocrystals, or larger ice molecules, that actually break down the cell structure of the food. During blast chilling and shock freezing microcrystals form and these smaller ice molecules prevent the cell structures from deteriorating. A perfect example of this is if you were to pull a steak out of your freezer at home and let it thaw on the counter at room temperature. A lot of liquid forms as a result of this, which is a direct result of food cells breaking down.

As more of this liquid escapes the product, so does weight, aroma and consistency, all elements that make-up higher quality food. Foods that are blast chilled can be stored in the freezer for longer periods of time without going bad, thereby reducing the amount of food that needs to be thrown out because of product degradation. If the product was shock frozen compared to blast chilled the product can be held longer with no loss in quality. Spoilage occurs at a much slower rate when food cells remain intact, which cuts down on waste. Blast chilling and shock freezing give foodservice operators the freedom to prepare food days in advance without a loss of quality.

Banquets are perfect examples of how operators can capture these savings. For example, the chef could prepare the meal for a banquet using a skeleton staff a few days before the actual event.

Being able to forecast and prepare days in advance allows for a better process workflow as it allows the kitchen staff much more flexibility in terms of preparation time and place. A continuing hot topic in the industry, part of the sustainability movement has included a focus on creating more seasonal menus, using fruits, vegetables, and other products at their natural peak times. Chefs can certainly create more seasonal menus thanks to blast-chilling technologys capability of storing those seasonal foods over longer periods of time without quality loss. In addition, there has been an added push to serve local or regionally-grown foods. This is where the longer storage capability of blast chilling comes into use as well. Those living in colder weather areas such as the Midwest and Northeast know the challenges that come with storing farm-fresh foods from the summer for use on winter menus. The item "Carpigiani Ice Cream Cake Chiller Gelato Blast Freezer" is in sale since Friday, June 24, 2016. This item is in the category "Business & Industrial\Restaurant & Food Service\Refrigeration & Ice Machines\Ice Cream Machines". The seller is "amazingsnow" and is located in Baltimore, Maryland. This item can be shipped to United States.